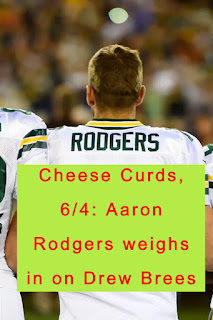 The Packers quarterback broke his silence on recent events, but did his words go far enough?


It took longer than many hoped or expected, but Green Bay Packers quarterback Aaron Rodgers finally weighed in on the unrest over racial inequality sweeping the us .

Rodgers took to Instagram to reply to New Orleans Saints quarterback Drew Brees’ remark (that he apologized for this morning) that he “would never accept as true with anyone disrespecting the flag of the us or our country.”

The Packers quarterback defended his team’s action of locking arms during the anthem before a game two years ago, saying it had been never about the flag then or now and implored people (including Brees) to “listen with an open heart” and involved people to teach themselves and “turn word and thought into action.”

While indirectly addressing the murder of George Floyd in Minneapolis or the racial inequality facing our country, Rodgers did a minimum of answer a peer who made a rather insensitive and admittedly ignorant statement.

That said, Rodgers’ words would hold more weight if he’d directly address current events rather than vaguely discussing them during a statement directed more at Brees than his own black teammates.

Packers QB Aaron Rodgers on protests: ‘It has never been about an anthem or a flag’—PackersNews.com

This isn’t the time for vague statements, Aaron. It’s the time for courage and swift specific action. Your teammates have made their feelings crystal clear. Can you, a white quarterback who’s one among the foremost famous athletes within the world, do the same? If you'll , you'll have a way more significant impact than simply slapping the wrist of a fellow MVP quarterback.

Jordan Love has never been afraid to work—Packers.com

Maturity and intelligence served Rodgers well during a painful transition and therefore the same traits are present in his likely successor. Jordan Love’s poise will serve him well during what might be another rough transition between starting quarterbacks for the Packers.

The of just about any new talent within the wide receiver room means Matt LaFleur will need to get creative to get explosiveness on offense.

PFF: Packers have 3 of NFL’s top 50 players, and one isn’t Aaron Rodgers—Packers Wire

You read that right. The Packers had three players in Pro Football Focus’ Top 50 and no-one named Aaron (Jones or Rodgers) made the list.

This would put me during a sour mood. I’d lose my zest for all times as this doesn’t really ap-peel to me. Someone would wish to return to my aid.

Packers QB Aaron Rodgers on protests: 'It has never been about an anthem or a flag'

Rodgers shared a picture from a 2017 game against the Cincinnati Bengals, when the Packers locked arms during a show of solidarity during the anthem after Colin Kaepernick and other NFL players had taken a knee in protest before games.

He added the text:

“A few years ago we were criticized for locking arms in solidarity before the sport . it's NEVER been about an anthem or a flag. Not then. Not now. Listen with an open heart, let’s educate ourselves, then turn word and thought into action. #wakeupamerica #itstimeforchange #loveoverfear❤️ #solidarity #libertyandjusticeforall #all”

Before that game, Rodgers had asked fans to hitch the team in doing so.

Earlier Wednesday, New Orleans Saints quarterback Drew Brees said in an interview with YahooFinace that he would still not support kneeling during the anthem as a sort of protest.

Within the primary hour after Rodgers posted, several teammates and former Packers players LeRoy Butler and Dorsey Levens supported the Green Bay quarterback within the comments or on their own Instagram story.

Packers safety Will Redmond was among those that expressed anger and dismay over Brees’ comments.

Redmond tweeted, “What is that this guy even talking about? the matter isn’t our military, flag or kneeling... it’s police brutality and social injustice in our country... see ya 9/27/20 boy”

The Packers are scheduled to play the Saints in New Orleans on Sept. 27.
Tweet